The Camcore 2019 Annual Reports are ready! 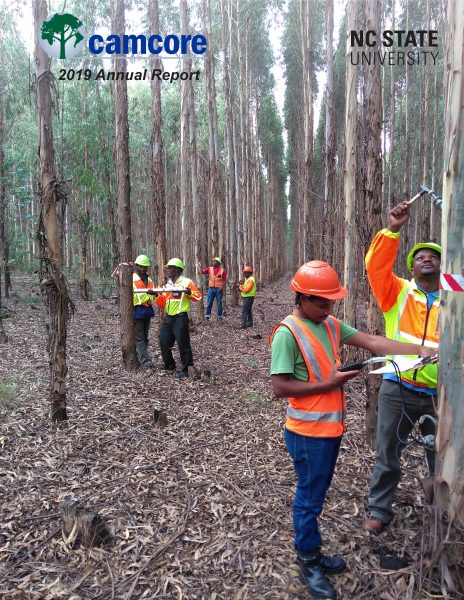 We look forward to hearing everyone’s feedback and discussing the information within the report.

In early March of 2020 Camcore established a new Carolina hemlock orchard located just outside of Linville Gorge, NC.  This 500 seedling orchard marks our third conservation planting of Carolina hemlock and the fifth domestic seed orchard established in 2020.  After 17 years of working with domestic seed collections for imperiled species located across the eastern US, it is extremely rewarding to see a portion of this germplasm going back into conservation plantings.  Many thanks are extended to the North Carolina Forest Service for both allowing us to establish this orchard on their property and for clearing the site prior to the planting.  We also greatly appreciate the labor from the NC Bridge Crew in helping to plant the seedlings as well as several volunteers with the NC Hemlock Restoration Initiative.  Without the assistance from these three groups this three day planting would have easily taken closer to three weeks.

At this point we are actively pulling more domestic seed from additional provenances and species with hopes to germinate it shortly.  With these future seedlings our goal is to maintain momentum in establishing additional conservation seeds orchards with our cooperators in the US.

In late January 2020 twenty individuals from Camcore and the USFS successfully planted nearly 1000 conifer seedlings into seed orchards in western North Carolina and eastern Tennessee.  Over the course of one frigid day we established both a 300 seedling eastern hemlock seed orchard and a 168 seedling table mountain pine orchard at the USFS Beech Creek Genetic Resource Management Area (GRMA) in North Carolina.  The following day these efforts were duplicated in the nearby Chilhowee, Tennessee GRMA under ominous grey skies.

These four seed orchards mark an important step forward in Camcores domestic conservation efforts and are hopefully the first of several more conservation plantings to come.  These orchards were established in partnership with the USFS.  Future seed produced will be shared by Camcore and the USFS.  Genetic material produced in these orchards will be instrumental in conservation, restoration, and research of these threatened conifers endemic to the eastern US.

It should be noted that the establishment of these seed orchards would not have been possible without the impressive team from the USFS that came out to help with the planting.  In addition to the planting team Camcore would like to single out Robin Taylor (USFS), Jason Rodrigue (USFS), and Drew McCarley (USFS) for helping to get this project implemented and in the ground.

Camcore is pleased to welcome new Research Technician Asheligh Hillen. Ashleigh is a graduate of UNC Asheville with a wealth of field experience in the southern Appalachians.  She will be based in Asheville, NC where her assistance in our domestic gene conservation and research projects will be invaluable. Her temporary position is currently funded for one year. During Ashleigh’s Camcore tenure she will be a USFS affiliate and will work closely with our collaborators in the Forest Service.  Camcore is excited to have Asheligh on board and to make further progress with our numerous domestic  projects.

The second phase of our three part hemlock silviculture study is now in the ground in western North Carolina! For this part of the study we are again looking at how sunlight levels impact hemlock growth but are now incorporating two species (Carolina and eastern hemlock) and following how light effects hemlock woolly adelgid presence. The 1280 hemlocks planted occured along a north-south transect with the center of the plot lying in the middle of a 1/4 acre canopy gap treatment. These gaps were part of a previously implemented oak regeneration study that looked at group selection harvests in a method termed “femelschlag.”

While the planting was at times cold and wet we were able to successfully get all of our trees in the ground in just three short days. A large round of thanks are extended to our USFS Partners from the Southern Research Station and Pisgah National Forest Appalachian Ranger, North Carolina’s Hemlock Restoration Initiative, and several volunteers for helping us to implement this important study.

Thank you to North Carolina’s Hemlock Restoration Initiative (HRI) for joining Camcore in getting our domestic conservation greenhouse in western North Carolina ready for winter. On Tuesday, October 29th a total of 8 HRI staff members and volunteers joined Andy Whittier in Waynesville, NC to clean up and organize our domestic greenhouse.  After a busy morning we were able to cover the greenhouse in anticipation of rapidly approaching freezing winter temperatures.  Camore greatly appreciates the assistance from the Hemlock Restoration Initiative and looks forward to continued collaboration in our shared interests of hemlock conservation.